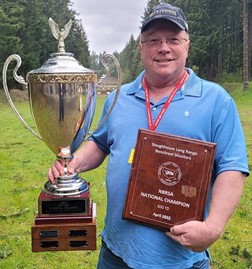 For the second time in seven months Bruce Teel is the 600-yard National Champion for the National Bench Rest Shooters Association (NBRSA). Bruce won his first championship in October of 2021 at the Sacramento Valley Shooting Center, then returned there in April of 2022 to successfully defend his title. For both of these events Bruce was using Peterson 6BR brass that he fire-formed to 6BRA.

Bruce started shooting competitively two years ago with a rifle built by Alex Wheeler. After claiming victory in a few local shoots at his home range, Upper Nisqually Shooting Facility in Eatonville, Washington, Bruce moved on to NBRSA registered matches at Tri County Shooting Range in Oregon. From there he made the jump to the national level. The rest, as they say, is history.

When asked what the future holds, Bruce replies, “My next goal is to move into F Class and shoot in F-Open Competition. I just bought a rifle chambered in .284 Winchester and will be shooting Peterson brass in that rifle as well”.

Glad to hear it, Bruce. Good luck! We’re sure we will see you on the podium soon.