Over the past one hundred years conservation efforts have become an important topic for millions of Americans. Unsustainable hunting practices and poor land management led to severe lack of habitat and wildlife population numbers at near extinction levels by the end of the 19th century. Then, in May of 1903, naturalist John Muir invited President Theodore Roosevelt on a camping trip. For three days they discussed issues such as commercial hunting, logging, and the impacts these activities would have on America’s natural resources. When these two historical giants returned from the wilderness, they brought with them the roadmap for what would become the greatest conservation movement in history. Out of this movement came the North American Model of Wildlife Conservation. There have been no bigger supporters, both financially and physically, of this endeavor than hunters. And of those hunter funded organizations none have been more vocal, or championed the cause better, than the Rocky Mountain Elk Foundation (RMEF). 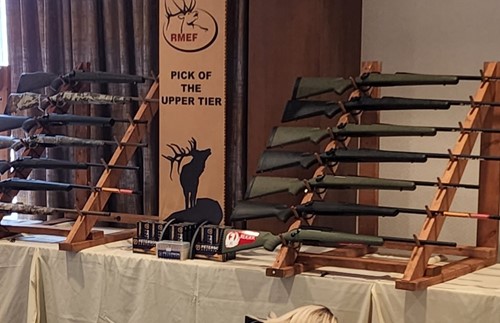 So far, the RMEF has donated hundreds of millions of dollars to protect or enhance over 8 million acres of habitat. They have opened or improved access to more than 1.3 million acres of public land. And they have helped to successfully restore elk herds to Pennsylvania, Kentucky, Missouri, North Carolina, Tennessee, Virginia, West Virginia, and Wisconsin. They have done all this while also funding wildlife research and countless other conservation projects.

Peterson Cartridge is proud to announce its support of the Three Rivers Chapter of the RMEF for 2022. At their annual Big Game Banquet, held the last Saturday in February, Peterson Cartridge employees and their families volunteered their time and brought with them ammunition donations for auction and raffle prizes. With nearly five hundred people in attendance the evening was a great success and over $200,000 was raised for conservation efforts.