Many people remember Roy Weatherby as the high priest of high velocity. He created new calibers that were the fastest on the market. Toward that end, he made a number of modifications to the traditional belted magnum casings of the day to achieve that goal.

However, according to Derek Peterson, the president and lead caliber developer at Peterson Cartridge, “I suspect that some of the adaptations Roy Weatherby made were simply to cause his casings to be more difficult for his competitors to manufacture. And to that end Roy was successful – really successful.” 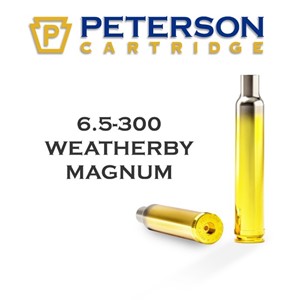 “But in the end, we solved each and every problem, and we are now producing 6.5-300 Wby casings, Peterson said. “We’ve run them through all our tests and quality checks; and believe them to be excellent 6.5-300s. This is the first of the Weatherby calibers we will be coming out with. Let me know what you think of them.”