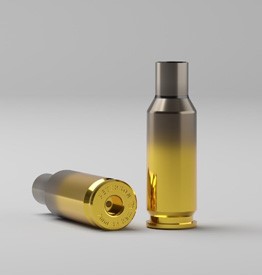 For a while now Peterson Cartridge has made 6mm BR Norma casings which the benchrest community buys a lot of (sold exclusively through Graf & Sons). But recently we had a customer ask us to make 7mm BR Remington casings. That customer is David Fricke of Lehigh Defense and SSK Firearms. Lehigh is known for making specialized, high-performance bullets.

Recently, Lehigh began making bullets for the J. D. Jones-designed Whisper line of cartridges, which are necked up from 7 BR casings. Some years back, J. D. Jones, of SSK industries developed several efficient dual-role cartridges, the .302 Whisper, the .338 Whisper, .375 Whisper and the .416 Whisper. These are all made from necked-up 7mm BR Rem casings. The dual role refers to the fact that they can be loaded subsonic, or for high velocity.

According to Fricke, “Remington made the XP-100 bolt-action handgun, and one of the calibers they chambered it in was 7mm BR, which became very popular with Silhouette shooters. Remington also made the 7 BR casings which people like to neck up to the different Whisper calibers. But the Remington brass hasn’t been readily available for the last decade or so.”

Fricke concluded, “The 7mm BR caliber is a highly efficient, inherently accurate round, which doesn’t require much powder. The balance between the powder charge, bullet weight, barrel length and related harmonics results in a caliber with outstanding accuracy.”