The .33 XC is a new caliber designed for Extreme Long Range shooting.

The .33 XC has the same head and tube base diameter as a .338 Lapua magnum, but with less taper in the body. It has a steeper shoulder angle. It’s longer than a .338 LM and holds quite a bit more powder. It is even taller than a CheyTac. 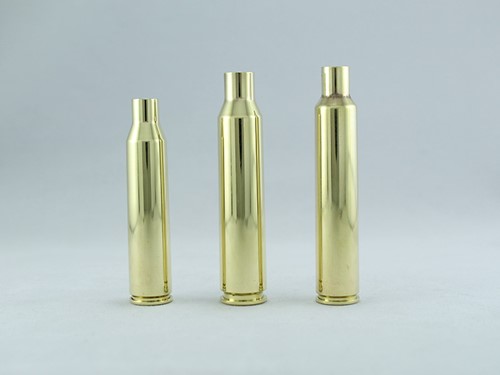 The concept of the .33 XC was developed by David Tubb, a long-time dominant force in the long-distance, competitive shooting community. He is also the designer of the 6 XC caliber. Tubb turned his attention to Extreme Long Range shooting, and the ELR community. He designed the .33 XC for shooters who have the gear to load and shoot .338 Lapua, who want to reach out farther. With a chamber reamer from Tubb a .338 Lapua Mag owner can have their gun rechambered for the .33 XC and turn it into an ELR gun.

Peterson Cartridge is a US rifle casing manufacturer with a strong reputation in ELR circles. Peterson brass is used in winning the King-of-2-Mile competitions – first in 2017 and also at the first KO2M France. Peterson brass was used in the win of the Nightforce Challenge. Peterson brass figures prominently in ELR Central competitions. Many shooters attempting new world-record, long-distance shots use Peterson casings.

Because of this, Tubb contacted Derek Peterson president and head caliber developer at Peterson Cartridge to design the tool pack to make the new .33 XC. Peterson has successfully developed about two dozen different caliber tool packs across the last few years but the 33 XC was one of the largest. The casings, loaded ammo, chamber reamers and rifles chambered in .33 XC are now available through David’s company Superior Shooting Systems.

The .33 XC is a high velocity, flat shooting caliber that allows shooters a new option for getting into ELR As evidence of its efficacy, David Tubb set a new ELR Cold Bore world record on December 2nd 2018 with the .33 XC, attested to by FCSA – 2,200 yards.