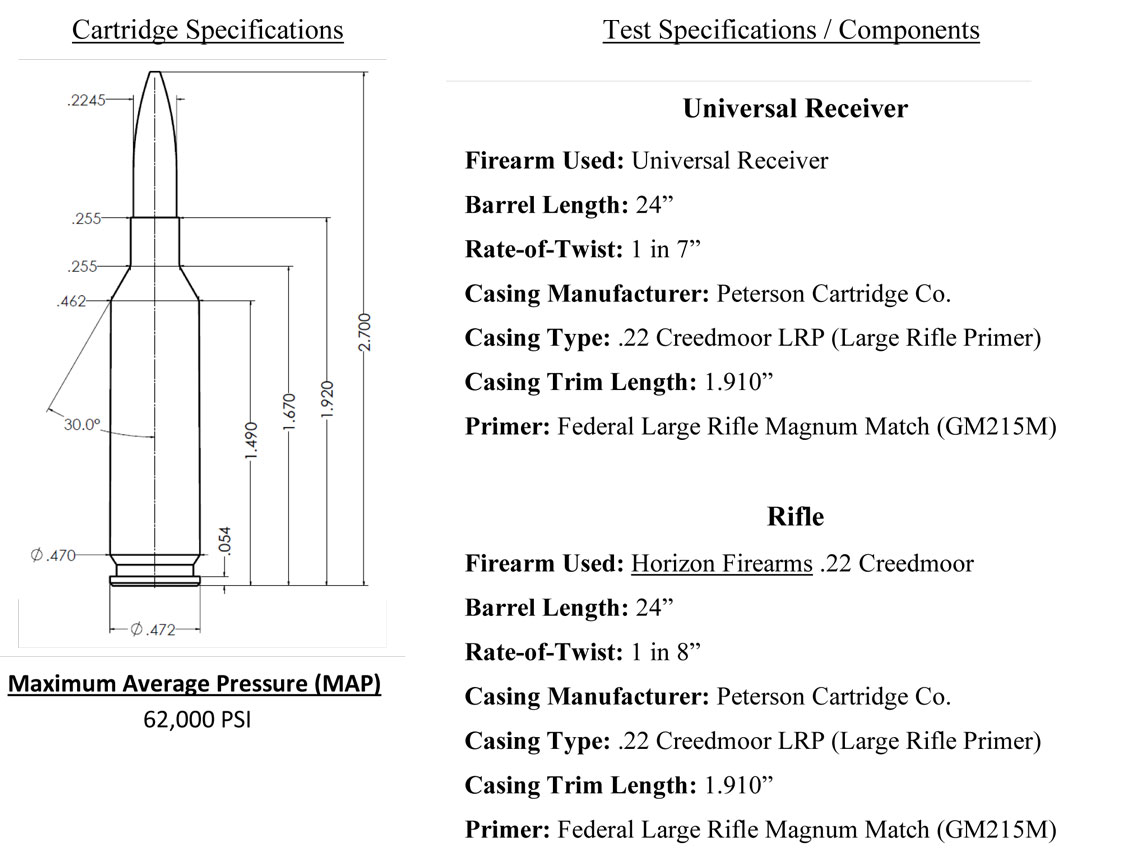 Since its inception in 2007, the 6.5 Creedmoor—developed by Hornady—has seen meteoric growth in its popularity. That growth persists in 2020; the cartridge continues to gain currency with hunters and shooters alike. As the popularity of the 6.5 Creedmoor has increased, so have the number of wildcat cartridges off of which it is based. Some of the most popular wildcat cartridges are the 6 Creedmoor, .25 Creedmoor, and, now, the .22 Creedmoor. This data sheet deals with the .22 Creedmoor.

Peterson Cartridge is committed to supporting its customers. One way we support our customers is by producing the high-quality casings they have come to expect from us. Another way we provide support is by investing in the equipment necessary to test the products we produce, so we can provide technical information to those who need it. To help our customers, and anyone else who shoots .22 Creedmoor, we decided to create and distribute this data sheet.

Please understand that the bullets and powders we chose to evaluate may not be the most popular among some shooters; however, our goal is to provide a wide spectrum of bullet weights and the powders used with them. In doing that, regardless of what bullet and powder one chooses, if you have access to a chronograph and a powder burn rate chart, you will be able to estimate a safe maximum pressure load for your rifle chambered in .22 Creedmoor.

All of the following data was gathered by our ballistician in our indoor ballistics lab located in our factory in Pennsylvania. Although we were able to gather pressure and velocity data in our lab, we have not tested these loads for accuracy. Again, these loads are just designed to give shooters information regarding what velocity a bullet and powder charge combination will produce given the SAAMI Maximum Average Pressure (MAP) of 62,000 psi. The following loads were not tested for accuracy or consistent velocity but are just reference points for you to use when working up your own loads.

Along with more than 25 other calibers, Peterson Cartridge now offers casings in 6.5 Creedmoor, 6 Creedmoor, .25 Creedmoor, and .22 Creedmoor. Also, please try our new extremely accurate loaded ammunition, which is available at https://www.grafs.com/. 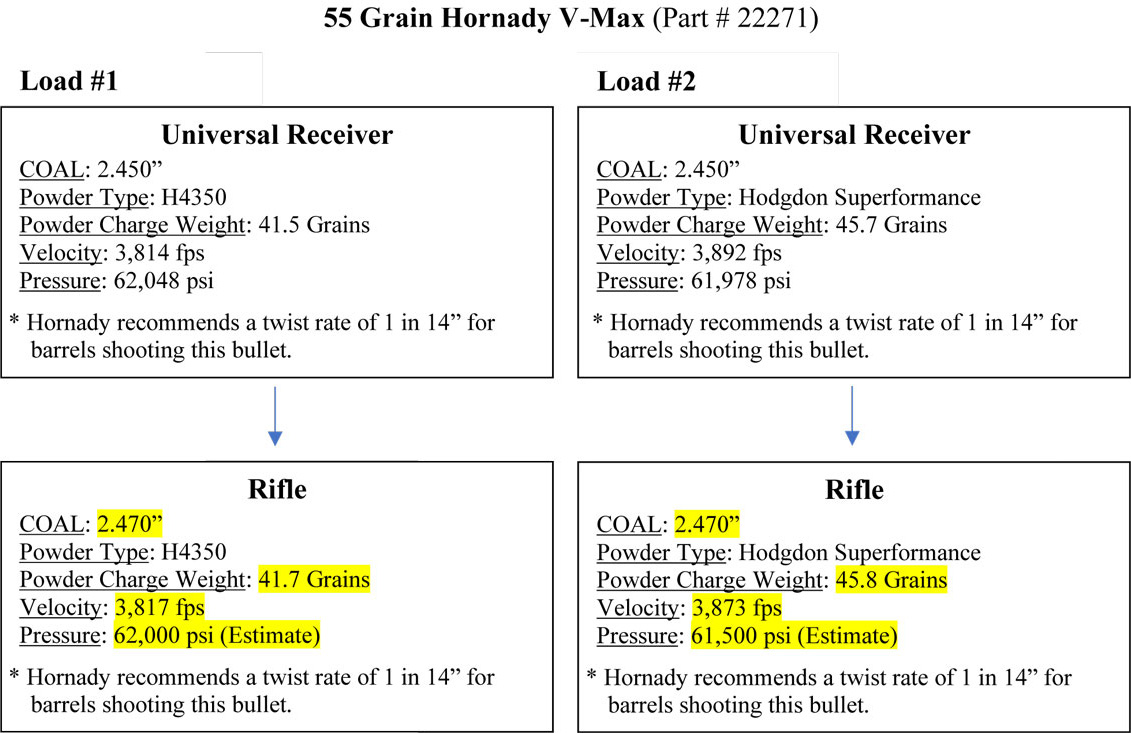 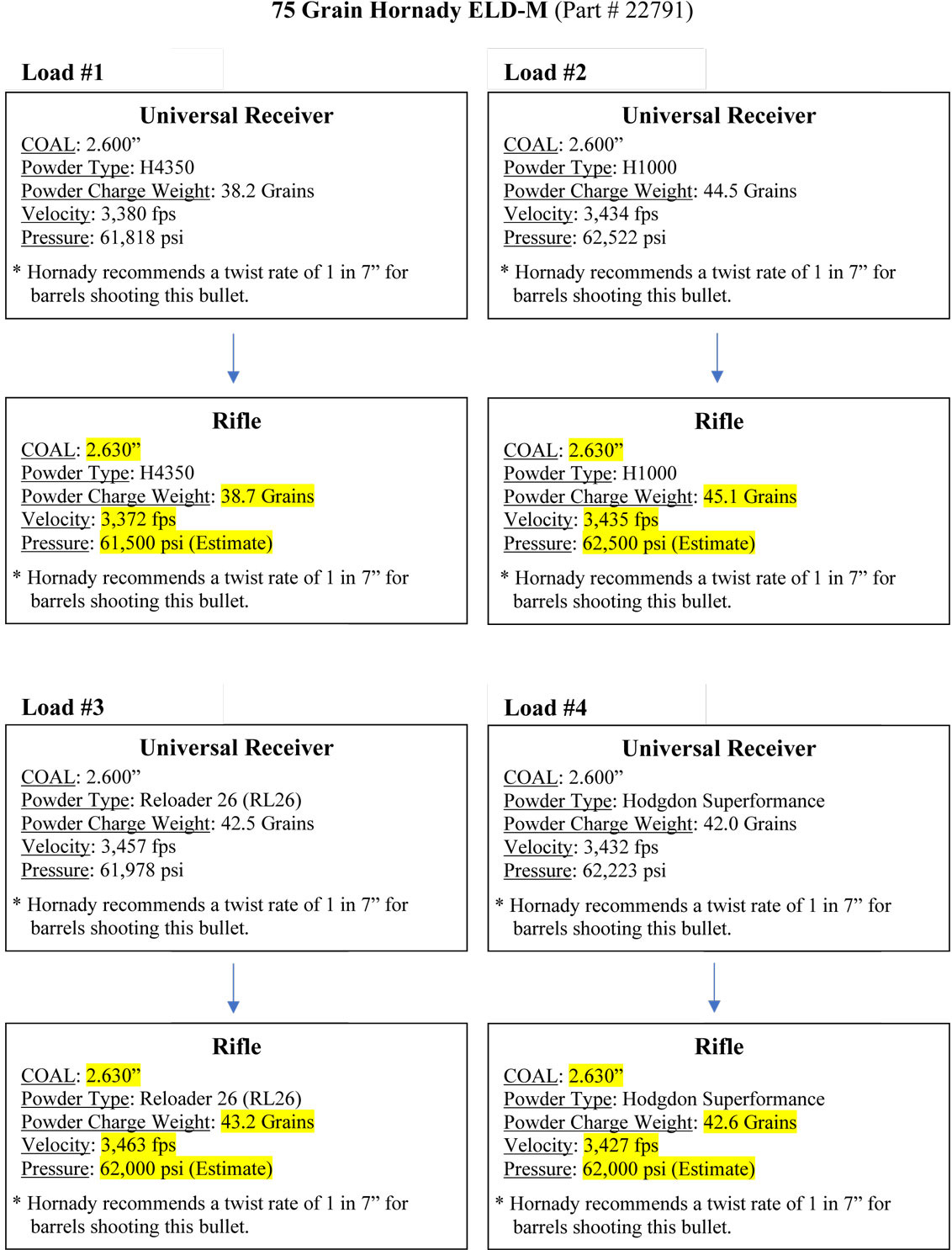 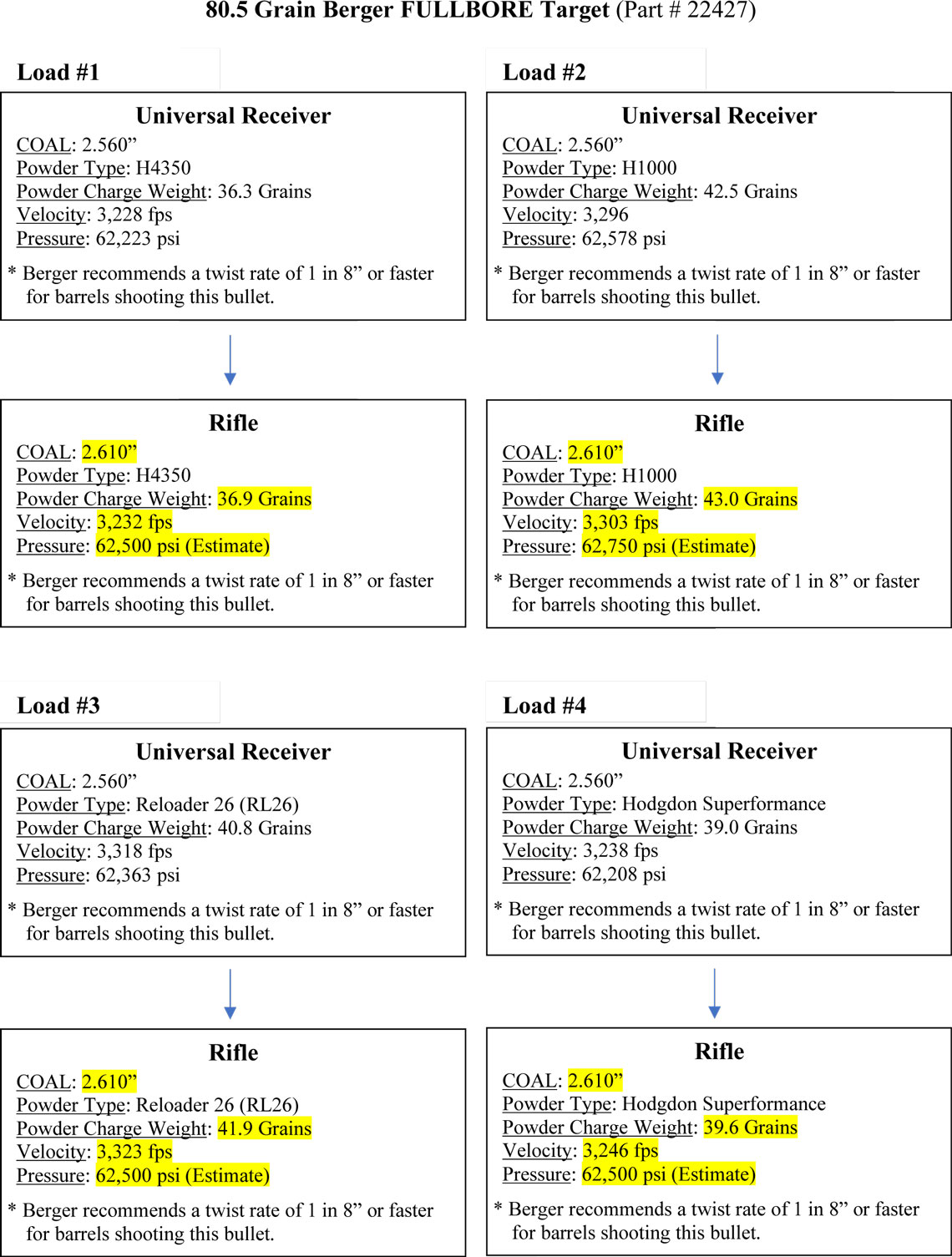 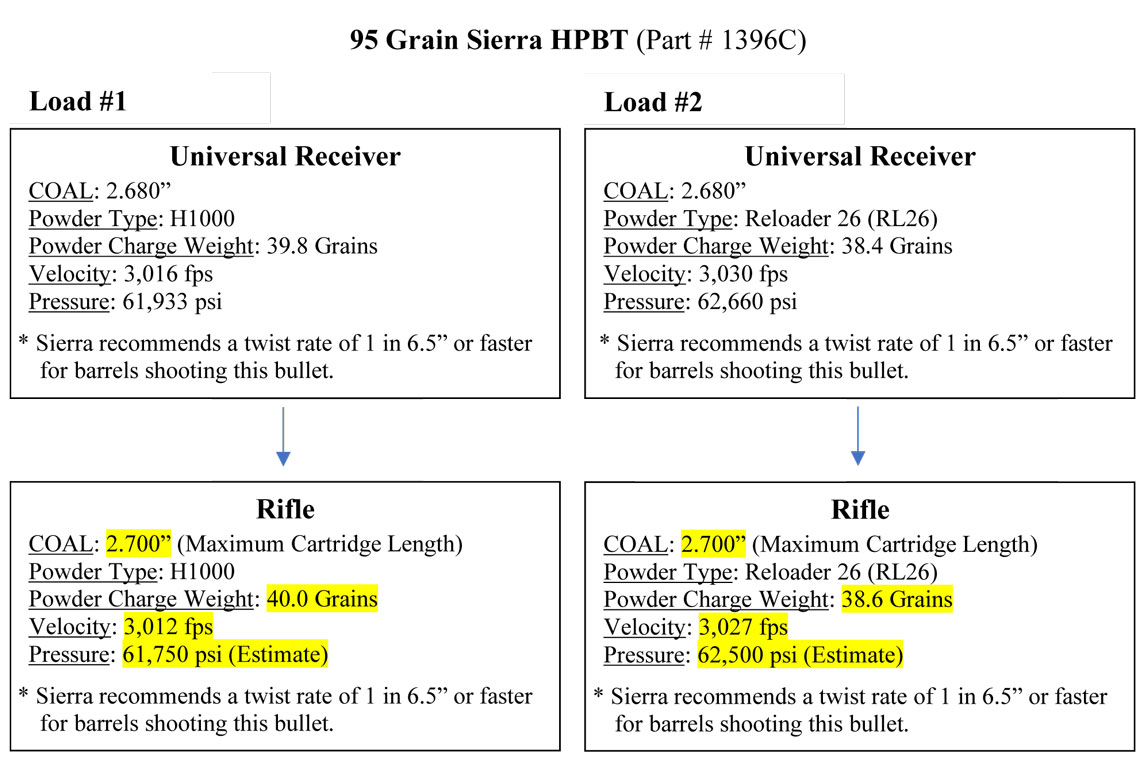 Although H4350 works well in the .22 Creedmoor when using mid-weight bullets, it does tend to cause pressure spikes—earlier than, say, RL26—when you are using heavy-for-caliber bullets like the Sierra 90 grain and 95 grain MatchKing. With those slower burning powders, like H1000 and RL26, we wanted to make sure we used a primer with the most potential to ignite them. This is the main reason we chose to perform this testing with large rifle magnum primers.

That said, we understand the technical audience for whom we are producing this data sheet. So, we took the time to do a little testing to show the difference using a magnum primer can make compared to a standard primer when shooting .22 Creedmoor. To illustrate this difference, we loaded 5 casings with large rifle magnum primers. We then took the same load and used standard large rifle primers instead. That way, the only difference between the two sets of 5 rounds was the type of primer used. Also, both the magnum and standard primers were of the same brand (Federal). The primers were also of “Match” grade quality.

We then fired both sets of 5 rounds and recorded the pressure and velocity for each round. We have compiled the data below. Both sets of rounds were fired in our lab, using our universal receiver, which has a 24” barrel. New casings were used for both tests.

Keep in mind these results are only for this particular load. It could be possible that the velocity increase we recorded, due to the magnum primers, was sufficient to push that load out of a consistent velocity node. Similarly, this increase in velocity could have caused the SD and ES to increase. In some instances, the velocity SD and ES might improve or worsen, depending on where you are in relation to a consistent velocity node in your particular rifle. You cannot be certain unless you run all of the different test combinations, and this limited test was just conducted for our own curiosity.

One thing we have not yet covered in this data sheet is the difference rifling twist causes, as they relate to pressure. As we have discussed above, estimating pressure is crucial when trying to develop a load for your rifle that is under the SAAMI Maximum Average Pressure (MAP). For our testing, we did not have a second universal receiver barrel with an identical twist rate to match that of the rifle with which we conducted our testing. Therefore, in the “Maximum Pressure Load Data” section listed above, we were only able to estimate the pressure each load produced in the rifle.

Fundamentally, we believe that reducing/slowing the twist rate in your rifle (e.g. going from a 1 in 7” to a 1 in 8” twist) will reduce the pressure that the casing experiences during firing. Theoretically, the bullet will encounter less resistance in a slower twist barrel due to the rifling not slowing the bullet down as much, thus putting a faster rate-of-twist on the bullet as it passes through the barrel. However, we could not directly test this theory, since, at this time, we do not possess the requisite equipment.

For reference, note that, after we gathered all of our test data, we searched popular internet forums to gather information about loads that shooters were currently using in their .22 Creedmoor rifles. The loads we chose to test were ones that we thought might be over pressure. We then tested those loads in our universal receiver so we could record a pressure for each load. In addition to our data sheet, we have included a few of these loads, complete with their associated pressures and velocities, below. With the below loads, we did have to shorten the COAL of the round slightly to fit into our universal receiver. The pressure measured for each load was not meaningfully affected by this slight COAL shortening. Each of the below loads are over pressure.

Do not use the below loads in your rifle. 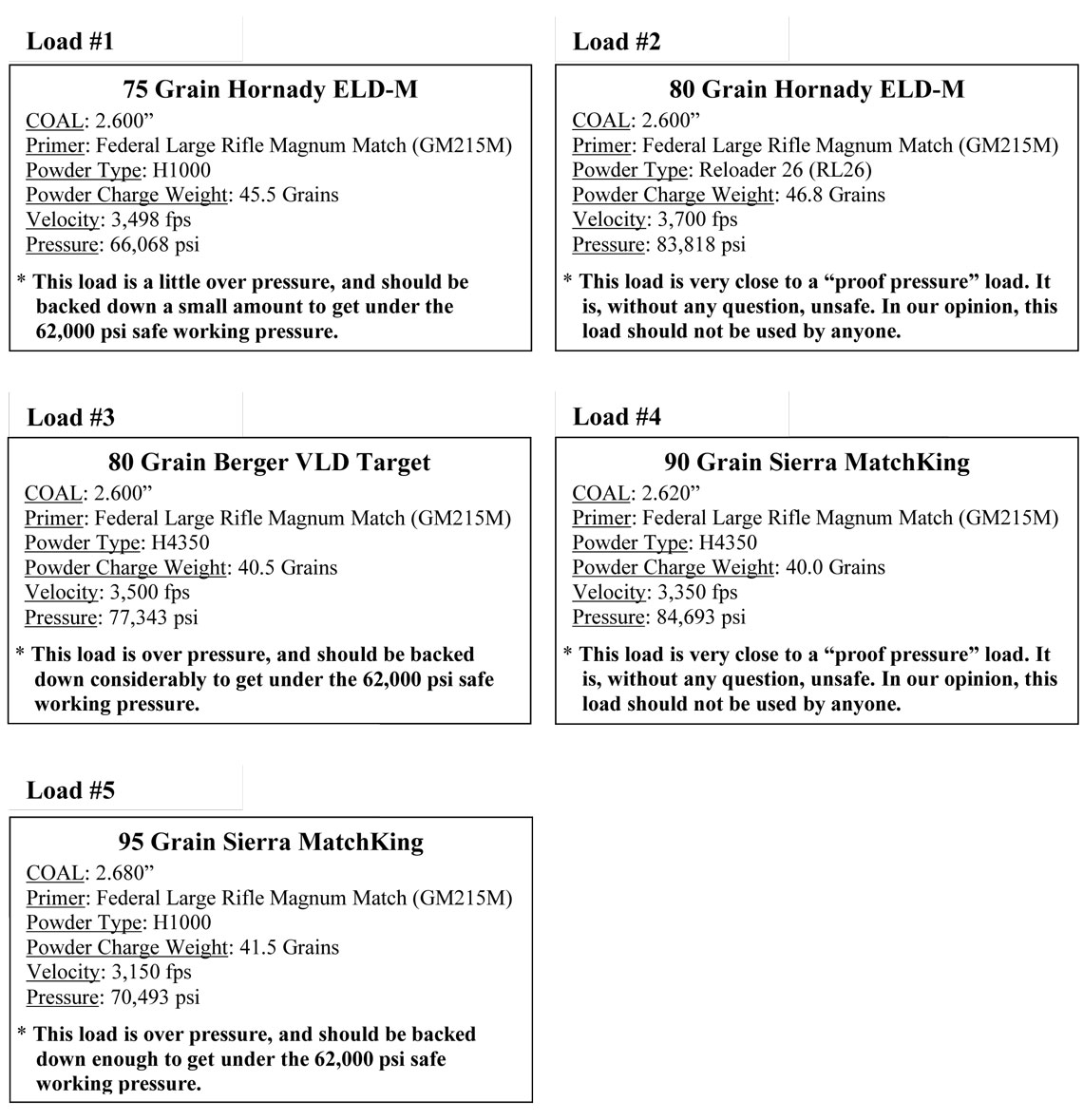 Horizon Firearms, located in College Station, Texas, produces some of the finest bolt action firearms on the market today. Besides the almost endless calibers they chamber their rifles in, they also were one of the 1 st companies to begin mass producing rifles chambered in .22 Creedmoor. Horizon Firearms is also a retailer of Peterson Cartridge .22 Creedmoor casings, their own brand of .22 Creedmoor loaded ammunition, and Whidden reloading dies for the .22 Creedmoor. You can check out their operation at https://horizonfirearms.com/ or https://22creedmoor.com/. They are also the operator of the .22 Creedmoor Facebook page located at https://www.facebook.com/22CreedmoorRifles/.

F4 Defense is a top-tier rifle manufacturer who specializes in semi-automatic rifles, specifically small fame AR10’s. Unlike other rifle manufacturers, F4 Defense has taken the lead on producing small frame AR10 semi-automatic rifles chambered in .22 Creedmoor. You heard that correctly. Now you can own a small frame AR10 rifle chambered in .22 Creedmoor. In addition to producing some of the lightest AR10’s in the world, F4 Defense is the only company in the gas gun industry that has a SUB-1/2MOA accuracy guarantee. In addition to their rifles, F4 also sells AR15 receivers, handguards, barrels, and Nightforce optics. F4 Defense, in a partnership with Spark Munition’s, now also offers their own line of loaded ammunition. The F4 Defense website is https://www.f4defense.com.

Sierra bullets needs little introduction, as they produce some of the highest quality projectiles available today. In addition to their hundreds of other bullet options, Sierra also produces some heavy-for-caliber 22 caliber bullet options which are suited well for use with the .22 Creedmoor. In particular, their 77 Gr SMK, 80 Gr SMK, 90 Gr SMK, and 95 Gr SMK are great. The Sierra website is https://www.sierrabullets.com/, and you can find their products wherever you currently shop for reloading supplies.

John Whidden produces some of the most precise and well-built custom reloading dies you can purchase. Along with his reloading dies, he also produces reloading tools and custom rifles. He is also a reseller of Barnard Actions, Peterson Cartridge rifle brass, loaded ammunition, and projectiles. John has really stepped up for the .22 Creedmoor community by producing a great set of reloading dies which work well with our, and others, .22 Creedmoor casings. Please check out his website at https://www.whiddengunworks.com/.

Primal Rights has been a big proponent of the .22 Creedmoor since before consumers were able to purchase properly headstamped .22 Creedmoor brass. Besides having created a ton of helpful articles on reloading, and shooting in general, Primal Rights also produces and sells some advanced reloading equipment and rifle parts. In fact, we (Peterson Cartridge) personally own one of their Competition Primer Seaters which we use for our development work in our loading operation. It has worked flawlessly for us so far. Primal Rights is also a reseller of Tangent Theta optics, as well as offering marksmanship training at their facility located in South Dakota. Please check out their article on the .22 Creedmoor here https://www.primalrights.com/library/cartridge-guides/22-creedmoor, and you can check out their website here http://www.primalrights.com/.

At the time of this writing, the .22 Creedmoor is still considered a “wildcat” cartridge since it has not yet been formally adopted by the Sporting Arms and Ammunition Manufacturers Institute (SAAMI). One of the benefits of a cartridge being standardized by SAAMI is that manufacturers who publish loading manuals will begin publishing load data for the new cartridge. Up until now, that has not happened with the .22 Creedmoor. We hope the above data will help you shoot your .22 Creedmoor with greater confidence that the load you have developed to work in your rifle not only shoots great but is also at a safe working pressure.

As most shooters know, Peterson Cartridge casings can handle more pressure than the SAAMI Maximum Average Pressure (MAP) lists as safe. However, we need to caution everyone reading this data sheet not to exceed the SAAMI Maximum Average Pressure (MAP), listed at 62,000 psi, for the .22 Creedmoor. Just because the casings can handle extra pressure, does not mean you should exceed recommended pressure standards. More often than not, the fastest load is not the most accurate load.

It has been reported that when standard lead-core, copper-jacketed bullets are used in the .22 Creedmoor, should the bullets be pushed at too fast a velocity, they might disintegrate in the air before they reach the target. In our opinion, the easiest way to avoid this problem is by not exceeding the established safe velocities we have listed above. We have also found that frequent rifle cleaning, to remove carbon fouling, can help prevent bullet disintegration. Similarly, choosing bullets with thicker jackets will also help prevent disintegration during flight.