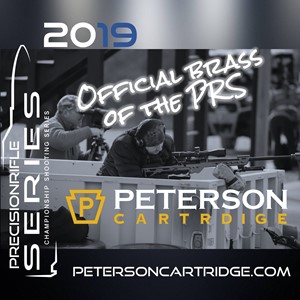 “We are eager to officially announce our 2019 partnership with Peterson Cartridge as the Official Brass of the Precision Rifle Series! The ambition and passion behind the Peterson Cartridge brand, their commitment to producing extremely consistent American made brass rifle casings for PRS competitors, and their dedication to the PRS community make them extraordinary partners of the largest precision rifle organization in the world.” said PRS Owner and Director Shannon Kay.

The Peterson Cartridge team has been working alongside PRS competitors and listening to their feedback. You will not find a group of more dedicated and energetic professionals, we are grateful for their support of and involvement in the PRS.

This year Peterson will be kicking off the season by supporting every single one of the 40 National PRS Pro Series competitions, putting incredible certificates for Peterson Brass on every single prize table, with $1000 worth of brass going to each PRS Pro Series Qualifier in addition to continuing their outreach to the shooters of the PRS. We cannot thank their team enough for their enthusiasm and unrivaled support of the Precision Rifle Series.

The PRS also looks forward to working with the Peterson team to successfully leverage the partnership to directly support membership, elevate national pro series competitions, and grow the sport. The PRS will host 40 of the most renowned national level precision rifle competitions in the nation, with the 2019 PRS Finale taking place from November 15 -17 where Peterson Cartridge will be sponsoring the event.

To find a Precision Rifle Series event near you, please visit: https://www.precisionrifleseries.com/bolt-gun-series