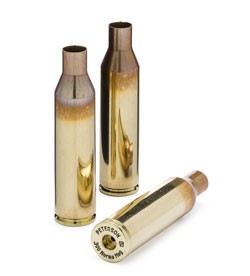 At the 2017 SHOT Show a customer came to Peterson and expressed interest in a .300 Norma case that could hold substantially higher pressures than existing casings in that caliber. So that is what the development team at Peterson set out to achieve. And they did it.

The cartridge is CIP registered, with a max pressure of 63,800 psi. Peterson’s customer wanted a casing that could withstand 75,000 to 80,000 psi, without the primer pockets loosening, or showing other signs of overpressure. In addition the customer wanted a standard deviation on the muzzle velocity as low as 10 to 15.

Peterson made a short run of its casing in late December 2017 and turned them over to its ballistician for testing. Test results were as follows:

The test protocol was to start with max pressure and increase the powder weight each shot to attempt to reach the asked for pressures. PCC has a universal receiver barrel and conformal pressure sensor in .300 Norma, plus a chronograph, so velocities and pressures could be measured.

Five cases were randomly selected and fired 7 times each, with the following results:

There were no case deterioration issues found. Primer pockets were still tight and no primer leaks detected at any time. The cases were very tight in the chamber on the last firing only, at 82,600 psi. There were two punctured primers found, one each on firings 4 and 5. It is believed that the universal receiver firing pin was to blame, as these happen occasionally at any pressure.

Following this test, 10 more new cases were selected and loaded with load #5, attempting to duplicate an average of 75,000 psi. Results were:

There were no loose or leaking primers, and extraction from the barrel was easy in all cases.

The last tests conducted were firing the same load in rifles to try to duplicate the same velocities as found in the universal receiver. Two rifles were available, a Savage Sport Tac, and a Barrett Multi Cal, both in .300 Norma.

The first firing in the Savage gave a velocity of 3070 fps, exactly what the average velocity was in the 10 previous firing, so further firing in this rifle was stopped. Extraction was easy. No primer issues were found.

The first firing in the Barrett was 3017 fps, followed by 3036 and 3040 as the powder charge was increased. Since the last two velocities were essentially the same it was deemed that any further increase in powder charge would not gain any velocity, so further firing was also stopped. Again, no primer issues were found, and extraction was easy.

In conclusion, the customer’s request of 75,000 psi, velocity standard deviation between 10 and 15, and tight primer pockets seems to have been met by these cases.