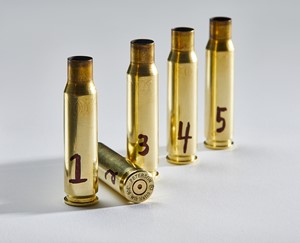 Five Peterson .308 cases after 32 firings. Cases were polished to help detect any cracks - none were found. 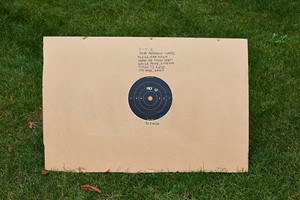 Five shots at 100 yards on the 32nd firing of each case, on a somewhat windy day.

Recently our ballistician had some extra time in his schedule, and asked what he should work on next. We said, “Just for the heck of it, see how many times you can fire our .308s before you experience failure.” So that’s what he set out to do.

He took five casings out of inventory and loaded them at SAAMI max pressure, which is the pressure we use for all of our longevity testing. It is a hot load, and he did the firing out of our Universal Receiver. This way he could measure pressures and velocities each shot. He shot all five, 20 times. (It takes a long time to do that.  Load five casings. Shoot five times. Back into the lab to reload, back into our indoor range to shoot, back into the lab, and so forth.)

After 20 firings with no sign of case deterioration he asked if he should keep going. We said, “Sure, let’s see how long these can go.” So he shot them five more times. Same result. All casings still in good shape. We told him to keep going. He shot each of them six more times. At this point each of the five casings had been fired 31 times. After several days of this the casings were still in good shape but we were experiencing “ballistician fatigue.”

Finally he said, “Let me take these cases to an outdoor range and see how they do for accuracy.” We agreed.

For the 32nd firing the cases were loaded with a somewhat lighter load. The gun we used was a Tikka T-3 bolt action, 20 inch barrel with a 1:11 rate of twist. After 32 firings the primer pockets opened about 0.002 of an inch but were still tight enough for further use. There were no cracks or signs of head separation. He put five shots in three holes at 100 yards. The group was 1 1/2 inches for the five shots, on a somewhat windy day.

Our goal here at Peterson Cartridge is to produce the best casings for long-distance shooters. Let us know how you think we are doing.

PS. If anyone has the time on their hands to shoot a group of three Peterson .308s to failure, we’d like to hear about the outcome.