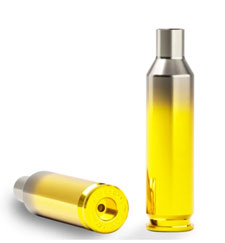 “At Peterson Cartridge, we frequently get requests to make casings in a new caliber, from trade shows we attend and from inbound phone calls,” according to Derek Peterson. “When requests for a specific caliber reach a tipping point, we add it to our development schedule. That’s what happened about five months ago regarding 6mm Creedmoor.”

Peterson explained, “We got a lot of requests for 6 Creedmoor. People were necking down 6.5 Creedmoor. Hornady doesn’t make it in small rifle primer (SRP). Starline does, but their flash hole is .080. The Lapua product, which a lot of people think of as the gold standard, has a flash hole of .060. So, the flash hole size in our 6 Creedmoor SRP is .060, the same as Lapua.”

“Casings with small rifle primer pockets do get more reloads than ones with large pockets,” continued Peterson. “There is more metal around the pocket, so they hold up longer. There is an advantage to this for competition shooters. The first three or so times a casing is fired the more it forms to the shooter’s chamber, which results in more consistent muzzle velocities. So the more reloads you get after that break-in period the better.”

“But we also make the 6mm Creedmoor in large rifle primer pockets,” Peterson stated. “The larger primers seem to be less temperature sensitive – they perform more reliably in cold weather. So for someone wanting to use their gun to hunt deer the LRPs may be the better choice.”