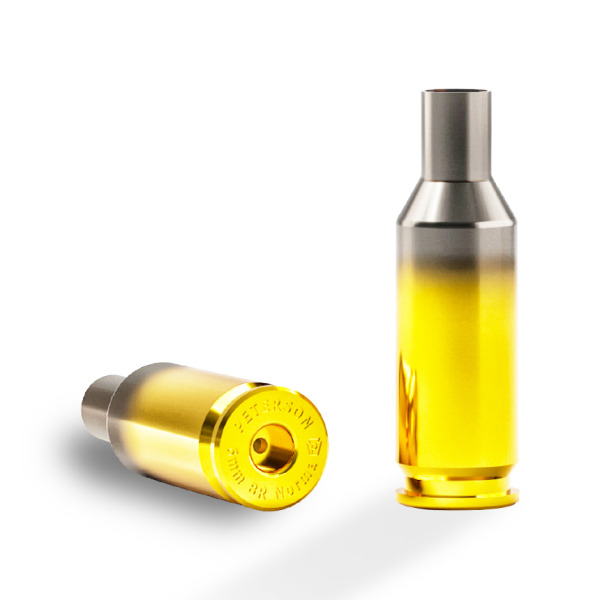 At the NASGW show today, Peterson Cartridge Co. of Pittsburgh, PA announced the addition of 6mm BR Norma to its growing family of rifle casing calibers.

The 6mm BR Norma goes by many names. Some call it the 6mm Norma BR. Some shorten the name to 6 BR Norma, or even shorter 6 BR. The headstamp on Peterson casings is 6mm BR Norma.

The 6mm BR Norma was introduced in 1996, designed for use with long, very low drag bullets. It is an excellent long-range target caliber with light recoil, which helps when your goal is to put all the bullets in the same hole at the target. The 6 BR Norma is particularly well suited for 1000-yard bench rest shooting. The 6 BR is also an excellent long-range varmint caliber.

Peterson’s 6 BRs have a small rifle primer pocket just like the other two leading companies that make it. But according to Derek Peterson, president of Peterson Cartridge, “You’ll find our 6 BRs have harder heads, which results in longer primer pocket life. Another thing I believe you will like about ours is we have less wall thickness variation.”

We asked Peterson’s ballistician for a comment about the new 6mm BR’s Peterson is releasing. He said, “I’m not a marketing guy. I’m an engineer. So I don’t have any marketing platitudes to give you. He pulled the notes from his testing and reported that across five casings the internal volume variation was less than half a grain of water weight.” He went on to say, “When I do a first-article-inspection on a new caliber we are introducing, my job is to see if I can break them. I ran these 6mm BR Norma cases through every test I have, and I couldn’t break them.”