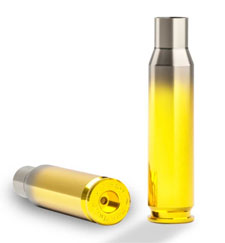 The .308 Winchester (+SRP) Match Grade Cartridge is manufactured on Peterson Cartridge’s new, state-of-the-art case line which uses cutting-edge technology to produce some of the most precise and consistent casings on the market. Peterson Cartridge Co is committed to producing Match-Grade Brass that enables our customers to get more reloads per casing than industry average.

Recently our ballistician had some extra time in his schedule, and asked what he should work on next. We said, “Just for the heck of it, see how many times you can fire our .308s before you experience failure.” So that’s what he set out to do.

He took five .308 Winchester casings out of inventory and loaded them at SAAMI max pressure, which is the pressure we use for all of our longevity testing. It is a hot load, and he did the firing out of our Universal Receiver. This way he could measure pressures and velocities each shot. He shot all five, 20 times. (It takes a long time to do that. Load five casings. Shoot five times. Back into the lab to reload, back into our indoor range to shoot, back into the lab, and so forth.)

After 20 firings with no sign of case deterioration he asked if he should keep going. We said, “Sure, let’s see how long these can go.” So he shot them five more times. Same result. All casings still in good shape. We told him to keep going. He shot each of them six more times. At this point each of the five casings had been fired 31 times. After several days of this the casings were still in good shape but we were experiencing “ballistician fatigue.”

Finally he said, “Let me take these cases to the outdoor range and see how they do for accuracy.” We agreed.

For the 32nd firing we used a lighter load. The gun we used was a Tikka T-3 bolt action, 20 inch barrel with a 1:11 rate of twist. He put five shots in three tight holes at 100 yards on a somewhat windy day.

After 32 firings of Peterson .308 Win the primer pockets opened about 0.001 of an inch but were still tight enough for further use. There were no cracks or signs of head separation.

If anyone has the time on their hands to shoot a group of three Peterson .308s to failure, we’d like to hear about the outcome.

Many competitive shooters prefer Small Rifle Primer pockets (SRP) because they experience longer primer pocket life due to the increased material in the head of the case. There is also a belief that Small Rifle Primers produce a more consistent ignition. Some people even report better groupings and lower velocity spreads.

However, SRP are not recommended for shooting in extreme cold or hot temperatures. And Small Rifle Primer Brass sometimes requires the firing pin on your gun to be bushed. This depends on your rifle and your bolt. If that is not done, you risk getting pierced primers. For more information on bushing your firing please watch this YouTube video https://www.youtube.com/watch?v=-CDJKLp7BsI.

To make sure you don’t have any problems talk to your gunsmith and understand what your rifle is set up for before using SRP brass. Doing that will make sure your reloading and shooting experience is much more enjoyable.