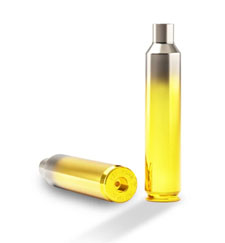 How does the Peterson brass compare to the other makers of 28 Nosler? Recently Peterson tested the three main companies that make the 28 Nosler for sale in the US. The casings we tested, made by those other companies are quite soft.

28 NoslerAccording to Derek Peterson, president of Peterson Cartridge, “I went online to look for high pressure loads that handloaders are using for 28 Nosler. Specifically, I was looking for loads that were fast and hot. I found a few shooters who are using a load that is close to SAAMI Proof pressure (33% higher than max pressure). Using that load, we loaded up some of our Peterson casings as well as casings from the other leading brands. The picture below shows the results after one firing. So as not to be accusatory, we photoshopped out the company name from the headstamp of the competing brand.”

Peterson continued, “We used the same load in the Peterson brass and the competitor’s brass. Bullets were seated to the same depth in both, and muzzle velocities were within 3 fps of each other. You can see from the photo the pronounced plunger mark on the competitor’s brass. But no mark on the Peterson casing. Other signs of over pressure, in the rival brands we checked, included blown primers and very heavy bolt lift. The primers in the Peterson 28 Nosler brass held fine, and the bolt lift was normal. With one of the rival brands, the case head was so soft you could read the headstamp on the bolt face after it was fired.”

The designers at Peterson are smart about brass grain structure and webbing thickness, and they use that to design casings which:

The 28 Nosler is a great long-distance big-game caliber that takes advantage of the newer, high BC, 7mm bullets. In addition to unprimed brass casings Peterson also offers 28 Nosler in loaded ammo.